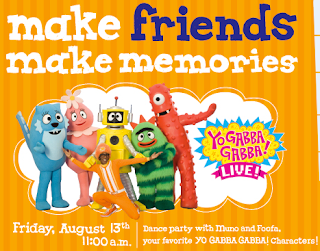 I’m sure YOUR kids don’t watch any tv and therefore wouldn’t know who these crazy characters are but my tot gets her fair share of tube time and she is going to freak when I take her to the Yo Gabba Gabba Live Dance Party with Muno and Foofa this Friday August 13th at the Please Touch Museum. Dance party starts at 11am and is free with paid admission. Kids and their grown-ups will also have a chance to win a family 4-pack to the Yo Gabba Gabba Live There’s a Party in My City Tour August 29 concert at the MANN Center for the Performing Arts.

In case you live under a media rock, Yo Gabba Gabba is the popular children’s television show that is broadcasted widely on Nick Jr. in the United States, the United Kingdom, Ireland, Italy, Canada and Australia. The show is hosted by DJ Lance Rock and features fun costumed characters, each with different personalities. The characters, Muno, Foofa, Brobee, Toodee and Plex are sometimes accompanied by different bands and artists on the show that team together with the motivation to teach children valuable lessons. Marking the second year in a row, Yo Gabba Gabba has recently won the Television Critics Association’s Youth Programming Award for Outstanding Achievement.

Hosted by DJ Lance Rock, the Yo Gabba Gabba There’s a Party in My City concert is touring North America. The hour long concert will include fun games and dancing just like in the show. Each show will feature a secret special guest to surprise the parents and entertain the children. The tour will make an official scheduled stop in Philadelphia for two performances on Sunday, August 29 at the MANN Center for the Performing Arts.