We’re so excited that the Kids Corner Music Festival is coming this month on Sunday February 17th. 25 years of Kids Corner? Now that IS something to celebrate! 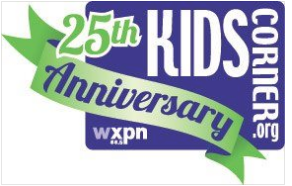 WXPN, the nationally-recognized leader in Triple A (Adult Album Alternative) music and home of the Peabody Award-winning Kids Corner radio show, will kick off Kids Corner’s 25th anniversary celebration with the first Kids Corner Music Festival of 2013 on Sunday, February 17 at Union Transfer (1026 Spring Garden Street) in Philadelphia. Doors open at 10:30 a.m. and the event will begin at 11 a.m.

To recognize and show appreciation for its young audience at such a key juncture, a brief kid’s press conference will take place at 10:45 a.m., when budding journalists from area elementary and middle schools will ask questions about the program and its longevity to Kids Corner program host Kathy O’Connell. One lucky young listener will have the chance to join the others on stage and ask his or her question via an online contest underway at http://kidscorner.org.

The press conference will be followed by live music from noted kids music performers representing opposite corners of the USA: From Seattle, The Not-Its! (at 11 a.m.), followed by Greensboro, North Carolina’s Big Bang Boom (at 12 p.m.).

Tickets for the Kids Corner Music Festival are available now at http://kidscorner.org or by calling (800) 543-7976 at a cost of $8 each for WXPN members  and $12 for the general public.

Giveaway
And now one lucky phillyfun4kids reader can win a family four pack of tickets to the Kids Corner Music Festival! To enter simply fill out the rafflecopter form below.

About Kids Corner
If you’re not already a Kids Corner regular listener, Kids Corner airs weeknights from 7pm to 8pm on WXPN-FM 88.5 FM, Kids Corner is WXPN’s live, interactive radio show for children that has earned more than two dozen broadcasting awards, including the prestigious George Foster Peabody Award, which recognizes outstanding achievement in radio and television broadcasting. The show’s primary mission is to provide a stimulating variety of educational and entertaining topics, guests and music for children ages 6 to 13. The program also serves as a resource for parents, educators and professionals in child-related fields.

Disclosure: I was provided with a family four pack of tickets to giveaway for the purposes of this promotion. I was also provided with four press tickets to attend the event. As always all opinions expressed about WXPN being an incredible local gem or Kids Corner Music Festivals and live family friend music being awesome are our own.