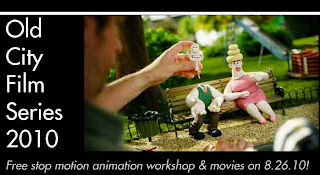 PLUS: A FREE stop motion animation workshop (ideally suited for ages 6-9 but all are welcome) from 7:30-8:30pm followed by the worldwide premiere of 3 Claymation shorts made by kids that attended The Clay Studio’s Claymation Camps in 2010 and (of course) the feature presentation!

Bring a snack and your lawn chair and enjoy a peek into the mind of Nick Park, one of the most celebrated claymation artists of our time. All the characters in Wallace & Gromit are made from molded plasticine modelling clay on metal armatures, and filmed with stop motion animation. The main characters have been called positive international icons of modern British Culture and of the British people. BBC News has called them “some of the best-known and best-loved stars to come out of the UK”! For a description of the feature presentation, click here!

The second in a series of three free outdoor film screenings scheduled this summer, the evening will begin with screenings of short stop motion animation films made by local children.

upcoming films:
September 23rd: THE ART OF THE STEAL (with short films created by local artists)