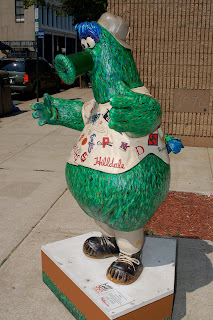 The 20 “Phanatic Around Town” statues will be leaving the City of Philadelphia at the end of the month — but before that happens, fans and tourists are invited to wear their Phillies red and take part in one “Big Phanatic Photo Op” on Monday, August 16, 2010 at noon, on the lawn of the Independence Visitor Center.

The event will celebrate that only two weeks remain for “Phanatic Around Town,” the popular public art project that features twenty, life-size Phillie Phanatic statues located at local attractions until Sunday, August 29. Since the program launched, thousands have toured the city to take photos with the statues.

At Monday’s event, plans will also be announced regarding a new “Phanatic Walk” for the month of September at Citizens Bank Park and a phillies.com online auction for the statues (the auction will begin on Friday, August 27) which will benefit Phillies Charities, Inc.

Participants in the Photo Op will include the Phillies Ballgirls, Phillies Scott Palmer, the artists who painted the statues, and other special guests.