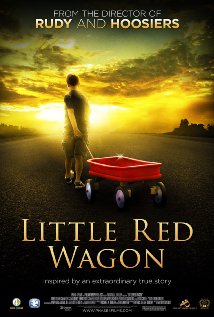 Have you guys heard of Little Red Wagon yet?

It’s a new movie that was just released this past weekend and it’s about the true story of a little boy named Zach Bonner who took it upon himself to help homeless children during the aftermath of Hurricane Charley by using his little red wagon to collect supplies and much needed water and walking from Tampa Florida to the White House. Along the way, Zack must overcome bureaucrats and blisters, and captures the heart of his fractured family and the nation. Directed by David Anspaugh (who directed “Rudy” and “Hoosiers”) and Zach Bonner himself, the film is a touching lesson in giving and sacrifice.

In 2005 Zach Bonner and his mother established The Little Red Wagon Foundation when he was seven years old. Zach was inspired to create the organization to aid poverty-stricken children after his experiences during the aftermath of Hurricane Charley in 2004. Bonner said that, “These kids don’t have a home, they don’t have a safe place to sleep at night. They’re out on the streets not because they want to be, but because it’s out of their control.” Featured on The Today Show and in many national publications, Zach is the youngest non-profit founder in HISTORY.

Personally, I’m inspired by kids like this and I want my kids to know what people their own age have and are doing to help others. In my family we work with Alex’s Lemonade Stand Foundation for the exact same reason. Kids can and really ARE making a difference and changing the world. Your kids can too. If you want to check out Little Red Wagon you can see it during its limited release this week at the Regal Oaks Stadium.

Disclosure: I was provided with an advanced copy screener of Little Red Wagon for the purposes of this post. As always all opinions expressed about how incredible it is when kids can and are making a difference are our own.