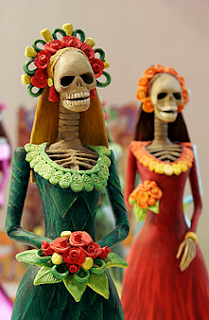 Happy November friends and Happy Dia de los Muertos, too. It’s been such a weird weird week here with Frankenstorm hitting the east coast hard. We lost power Monday evening and didn’t get it back on until yesterday afternoon just hours before our neighborhood was out celebrating Halloween.

We’ve been roughing it at “camp” here in the house (which of course the girls loved) but given that we had no estimate from PECO as to when our power was going to come back we were about to pack everything up and move to some new digs to ride out the rest of the week until we had heat and power again. Thank goodness it came back on. We were very lucky.

Then, Halloween happened and was not postponed in our neighborhood which I actually think is really bizarre since so many of my neighbors were without power until just hours before the trick or treaters were to come around. And there were still downed trees and limbs and frankly it was pretty unsafe to be out, I thought. And, yet Halloween happened. Costumed kids showed up. Rang bells. Got their sugar highs. Had their crashes and went to bed finally along with the exhausted parents who love them.

We count ourselves extremely lucky to have fared so well with no damage to our house or property despite being surrounded by hundred year old trees that were swaying and dancing the night away through Hurricane Sandy. Obviously other areas were much more heavily impacted than ours and families and communities across the mid-atlantic are dealing with horrific loss and devastation from this incredibly powerful and destructive event.

If you got out yesterday to celebrate Halloween, I hope it was happy and fun. If you’re still stuck with no power indoors I send a prayer for you and your family that it comes back on as soon as possible and you get the joy again of flipping a light switch or running your garbage disposal (which I found I really missed desperately after nearly three days without power). And for the rest of us, I’d say this devastating storm was a pretty vivid reminder of just how fragile it all is. How quickly families can experience loss. And also how quickly we can begin to rebuild and thrive again, too.