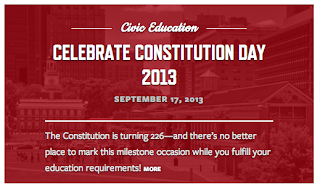 Today, Tuesday Sept. 17th, is National Constitution Day and there are celebrations across the country honoring the 226th birthday of the Constitution. Visitors enjoy FREE ADMISSION all day today at the National Constitution Center right here in Philadelphia. In addition to free admission there will be festivities and ceremonies all day to mark this milestone occasion including:

Flag Raising, 9 a.m. Front Lawn
Immediately following the Preamble reading, the museum’s brand-new flagpole will be dedicated during a special flag-raising ceremony. The Perseverance Jazz Band will perform the National Anthem followed by a patriotic recitation of the Pledge of Allegiance. The program will be attended by representatives from the Daughters of the American Revolution and the Sons of the American Revolution, who generously supported the installation of the flagpole.

Printing and Craft Activities, 9:30 a.m. – 5 p.m. Grand Hall Overlook
Visitors can explore a re-created Colonial print shop—complete with a replica printing press from the 1700s—where they can print a copy of the Preamble in the same way as the Constitutional Convention’s printers John Dunlap and David C. Claypoole. Plus, visitors can take part in arts and crafts projects, join in a calligraphy demonstration, and learn the copperplate script used to pen the Constitution.

American National Tree Induction Ceremony, 10 a.m. Main Exhibition
Visitors can join in a special ceremony honoring Hiram Rhodes Revels—the first African-American United States senator—who is the latest addition to the popular American National Tree exhibit. The addition of Revels was determined by the winning essay of the M.R. Robinson National Constitution Center American National Tree Contest. The National Constitution Center, in collaboration with Scholastic, Inc. and the Alliance for Young Artists & Writers, selected high school junior Sam Duffy from the Collegiate School in New York, New York as the 2013 winner. He and his family will attend the induction ceremony, along with Scott Larner, Senior Manager, Programs, at the Alliance for Young Artists & Writers. Congressman John Lewis will accept on behalf of Hiram Rhodes Revels.

Naturalization Ceremony, 10:30 a.m. F.M. Kirby Auditorium
50 immigrants from 27 countries including Afghanistan, Iraq, India, and Sierra Leone will take the Oath of Allegiance to officially become citizens of the United States. The ceremony will feature a keynote address by Gerda Weissmann Klein, Founder of Citizenship Counts, Holocaust survivor, 2010 Presidential Medal of Freedom recipient, and proud naturalized citizen. Presiding will be the Honorable John R. Padova. National Constitution Center President and CEO Jeffrey Rosen also will be on hand to welcome the newly naturalized citizens.

Congressman John Lewis: The March for Civil Rights, 12:30 p.m. F.M. Kirby Auditorium
Congressman John Lewis will discuss his new book March: Book One—the first in a graphic novel trilogy that shares the congressman’s remarkable story with new generations. A keynote speaker at the historic March on Washington in 1963, and a Medal of Freedom recipient from President Obama, Congressman Lewis also will explore today’s constitutional questions related to equal rights. National Constitution Center President and CEO Jeffrey Rosen will moderate the talk. Attendees will receive a FREE copy of March: Book One. A book signing will follow the program.

Tinker Tour: The Power of an Armband, 1:30 p.m. Grand Hall Overlook
Civic activist and 1960s free speech icon Mary Beth Tinker will share her story from the Supreme Court’s memorable “armband case,” as well as her journey to boost free speech awareness and civic education. Tinker will be joined by her brother and co-plaintiff John Tinker. Throughout the day, visitors can climb aboard the “Tinker Tour” bus, which will be parked outside the museum on Arch Street. The Constitution Center is the very first stop of the Tinker Tour, which will travel the country throughout the 2013-14 school year.

Drones and Your Privacy, 2:30 p.m. F.M. Kirby Auditorium
Carrie Cordero, Director of National Security Studies, Georgetown University, Claire Finkelstein, Director, Center for Ethics and the Rule of Law at the University of Pennsylvania, and the National Constitution Center’s President and CEO Jeffrey Rosen will engage in a public conversation exploring the constitutional implications of drones for targeted assassinations and the use of domestic drones for surveillance by U.S. law enforcement. This program is presented in partnership with the University of Pennsylvania Law School.