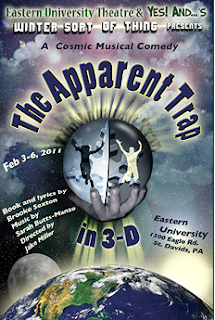 Ok, remember how I told you about A Winter Sort of Thing Presents The Apparent Trap??? How it’s Eastern University Theatre and Yes! And…’s joint production running one weekend only — February 3-6, 2011.

The Apparent Trap is “a ‘cosmic musical comedy’ of song, puppetry, high jinx, near misses, and the ever-important question of how we got here.” The story begins in a typical classroom. A very earnest student has put together a presentation of the mystery of life, one brought into fruition by Mother Nature and Father Time. In contrast, two higher achieving students are explaining a very different beginning as realized by a large superconducting supercollider. When this experiment goes awry, the three students are tossed to the other side of the sky and find themselves in a totally different world.

And you can now check out Yes… And’s Winter Sort of Thing production blog for the insider deets on the play preparations, too.

To enter the contest, just leave a comment below by Thursday February 3rd at 11:59 pm Eastern. The winner will be chosen using random.org and announced and notified about how to claim their tickets on Friday February 4th. Increase your chances to win by liking us on facebook and/or following us on twitter (and then leave another comment below to say you are now following us). If you already follow, just leave another comments below that you already follow us for your extra chances. And bonus — if you tweet about the contest using the hashtag #phillyfun4kids, you get yet another chance to win. Make sure to leave your email address so we can contact you if you win. Good luck!!