Don’t know what an Oogielove is yet? Well, that’s all about to change this “Oogust” 29th when The Oogieloves and the BIG Balloon Adventure hits theaters around the country. 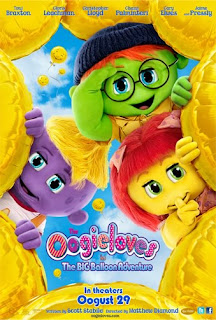 I had the unique and very fun opportunity to attend an advanced screening of The Oogieloves and the BIG Balloon Adventure last week in Philadelphia and got to meet the team behind The Oogieloves including producer Kenn Viselman and writer Scott Stabile. I really so enjoyed meeting the creative team behind this movie and was just thrilled to learn about their campaign to create a Rated GGG rating to keep our kids safe from unnecessary violence and darkness in the movies. Kenn and Scott even petitioned with the Motion Picture Association to get this new Rated GGG rating approved (but of course, it was not approved).

My kids are sensitive. Especially my four year old. I have taken her to see some other much anticipated “children’s movies” and we’ve had to leave within the first seven minutes because the action and explosions were too loud and too intense. I have had to fast forward through entire portions of major DVDs at home because they’re too scary for her. It stinks really and is just so unnecessary. Four year olds shouldn’t be having nightmares about their mothers being killed or their families or themselves being in physical danger. They just don’t.

Other than a few wildlife documentaries and a re-release in a popular children’s movie in 3-D, Hollywood has completely ignored the youngest moviegoer. The best they give us for our kids – animated PG films – are loaded with aggression and bloodshed. So I’m pretty much thrilled with these guys for putting out a movie that not only is completely and totally kid-friendly and Rated GGG but also encourages kids to get out of their seats, sing along, dance, clap and just be the little active people that they are when it comes to how they engage with a movie.

Kenn Viselman, the creator of The Oogieloves in the BIG Balloon Adventure and the marketing genius who introduced us to Teletubbies, Thomas the Tank Engine, Noddy and Eloise, had had enough with the violence and darkness in major motion pictures intended for children. So het set out to reinvent the movie-going experience. The Oogieloves and the BIG Balloon Adventure film is basically a movie and a live show rolled into one – is the first-of-its-kind interactive family musical that encourages the audience to get out of their seats, dance, and sing. As Kenn and Scott called it, “a Rocky Horror Picture Show” type movie but you know, for kids. Visual and auditory cues invite the audience to “move” the action along, allowing parents and kids to interact not only with the characters, but also with one another.

The story follows the Oogieloves – Goobie, Zoozie and Toofie – as they prepare for a surprise birthday party for their friend, Schluufy. When their guardian, J. Edgar, loses the last five magical balloons in all of Lovelyloveville, the Oogieloves take action. Along the way, they meet Rosalie Rosebud (Toni Braxton), Dottie Rounder (Cloris Leachman), Lola and Lero Sombrero (Jaime Pressly and Christopher Lloyd), Milky Marvin (Chazz Palminteri), and Bobby Wobbly (Cary Elwes). And some of the guest appearances are really just brilliant. I espeically loved the Bobby Wobbly song and character and adored Lola and Lero Sombrero – too fun!

Your kids are going to love this movie experience – I guarantee they’ll be out of their seats in no time singing and doing the Oogie cheer. 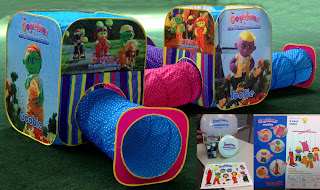 To get ya’all excited for “Oogust 29th” I have an Oogieloves Kids Prize Pack for only lucky phillyfun4kids reader. The prize pack includes an Oogielives Tunnel Tent, a Mobile, Glitter Tattoos (2), Stickers (2) and Beach Balls (2).

And Moms? Don’t forget that WE have the power to change what Hollywood pushes on our children. Hope you and your kids enjoy The Oogieloves and the BIG Balloon Adventure!

Disclosure: My kids and I were provided with complimentary tickets to the screening of The Oogieloves and the BIG Balloon Adventure and I participated in a Power of Mom roundtable discussion with the creators and writers. My two girls enjoyed Camp Oogielove and got to decorate lunchbags and enjoy popcorn and a few treats, too. Kids were also provided with Oogieloves tote bags, beach balls and posters and I received a gift card for participating in the roundtable. All opinions expressed about the Rated GGG campaign and the Power of Mom being awesome or interactive movies filled with pure wholesome love and lots of fun rocking are our own!