It’s officially October and that means time for some not too spooky Halloween fun! To help you and your kiddos get excited for the upcoming Halloween festivities and in the mood for monsters we’re pleased to offer a new giveaway in conjunction with the release of Hotel Transylvania which opened in theaters this past weekend.

Hotel Transylvania stars Adam Sandler as the voice of Dracula, the owner of Hotel Transylvania, where the world’s monsters can take a rest from human civilization. Dracula invites some of the most famous monsters, including Frankenstein’s monster, Mummy, a Werewolf family, and the Invisible Man, to celebrate the 118th birthday of his daughter Mavis. When the hotel is unexpectedly visited by an ordinary young traveler named Jonathan, Dracula must protect Mavis from falling in love with him before it is too late. Selena Gomez, Andy Samberg, Kevin James, Fran Drescher, Jon Lovitz, Cee Lo Green, Steve Buscemi, Molly Shannon and David Spade all are also voice characters in the movie, too.

Audiences are loving Hotel Transylvania – in fact, it set a new record for the highest-grossing September opening weekend, and earned a total of $51.1 million on a budget of $85 million! So if you haven’t seen it yet, you should definitely check it out.

Note: It’s rated PG – not G – so maybe not for the very littlest viewers but take the bigger kids out for a great time and some good laughs! 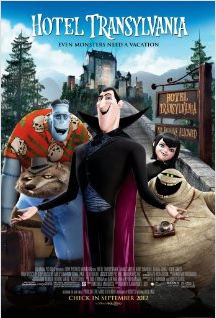 Now one lucky phillyfun4kids winner will recieve a Hotel Transylvania prize pack including:

Disclosure: phillyfun4kids was provided giveaway items for the purpose of this giveaway. As always, all opinions expressed about giveaways being fun are our own!