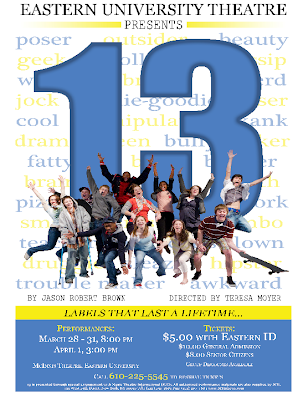 Eastern University Theatre presents 13, a musical comedy about coming of age, teen traumas and middle school survival. This high-energy musical that tackles the trials and traumas of growing up and fitting in, follows the story of Evan Goldman, a 13-year-old who is forced to move when his parents get divorced and leaves New York for a small town in Indiana. Evan thinks the town is “lame” but is determined to make friends with the most popular kids, so he can throw the best Bar Mizvah party ever. Easier said than done. The star quarterback promises to deliver, but only if Evan meets all his demands and drops his only friend, Patrice. The school geek sees an opportunity for blackmail and someone is spreading the nastiest rumors. Every day he faces a new teen trauma: incitement and extortion, first dates and first kisses, cell phones, cliques, clashes and crushes. It’s a rite of passage story to which all ages can relate (though ideally suited for kids ages 10 and older).

It runs Wednesday thru Saturday March 28-31 at 8PM and Sunday, April 1 at 3PM in McInnis Auditorium. Tickets are $10 general admission, $8 for students and seniors and $5 with an Eastern University ID. Tickets can be reserved by calling 610-225-5545.

And now one lucky phillyfun4kids reader can win a family four pack of tickets to go see 13.

To enter to win a family four pack of tickets to see 13 at a show date/time of your choosing between Wednesday March 28th – Sunday April 1st simply leave a comment below by Sunday March 25th at 11:59 pm Eastern. The lucky winner will be chosen using random.org and announced and contacted on Monday March 26th. Please also tell us which show date/time you would prefer when leaving your comment (we’ll confirm show details with you if you’re a winner.)

Just be sure to leave an additional comment for each entry letting us know that you posted/shared/followed/liked, please. If I’m doing my math correctly, that’s a total of eight chances to win!!

Congratulations to Michelle Wolfson! You’re the lucky winner of a family four pack of tickets to see 13! Check your email for details to claim your tickets.

Don’t forget to leave your name and email address so we can contact you with details to redeem your tickets by Sunday March 25th. Good luck!