Just in time for Mother’s Day, check out this new movie called The Evolution Of Dad. It’s a documentary about fathers by Dana Glazer, a friend of of one of my mommy-group friends, who is a huge advocate of fathers and fathering. Check out the trailer for a preview of the first five minutes. The film sends a powerful message about men being more involved in family, and looks at the stories of a bunch of dads and what they have been up against to do so. Originally set to be released on Father’s Day, The Evolution of Dad DVD is available now through the website and on May 18th for general release. If you do order now, use the coupon code EVOMAIL101 to get 15% off your order. 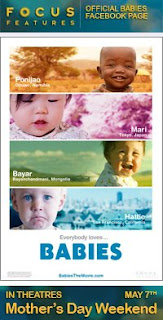 And speaking of new movies for parents, I’m so excited that the movie Babies will debut this Mother’s Day weekend. I’ve been tearing up at the trailer of this movie ever since I started seeing it and now it’s finally coming. This visually stunning new movie simultaneously follows four babies around the world – from first breath to first steps. From Mongolia to Namibia to San Francisco to Tokyo, BABIES joyfully captures on film the earliest stages of the journey of humanity that are at once unique and universal to us all. As a 37 week pregnant mommy this is a perfect flick for me. I know I won’t get to theaters to see it but look forward to watching it at home as soon as I can get my hands on it.